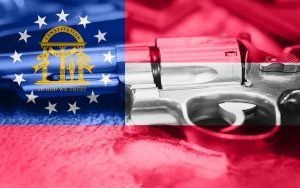 Are warning shots legal?  Let’s discuss what the law in Georgia has to say about warning shots (if it says anything at all), and some best practices to take with respect to warning shots.

Warning shots are not specifically addressed anywhere in Georgia law, so our discussion revolves around possible legal theories and practical experience. Now, this next statement is the most important part of our discussion, so please remember this:  warning shots are a bad idea!!  Matter of fact, they’re the worst idea in this post.

Firing a warning shot violates at least three of the four most basic rules: by firing a warning shot, you are pointing your firearm – not at what you are willing to destroy – but in an indiscriminate direction, at something you have most likely have no intention of destroying. You have failed to keep your finger off the trigger until your sights are on target (because you don’t actually have a target).  Additionally, you can’t be sure of your target and what is beyond it because you aren’t actually pointing your firearm at your target, but rather away from it (and towards what, exactly?).

“A person who causes bodily harm to or endangers the bodily safety of another person by consciously disregarding a substantial and unjustifiable risk that his act or omission will cause harm or endanger the safety of the other person and the disregard constitutes a gross deviation from the standard of care which a reasonable person would exercise in the situation is guilty of a misdemeanor.”

A warning shot considered reckless conduct can land you in jail for twelve months because of its status as a misdemeanor.  And that’s twelve months for every identified victim, meaning anyone close enough that the prosecutor feels could have been potentially suffered injury.  You don’t want to leave that kind of life-changing math up to the government.

But reckless conduct may be the “best case scenario” if you are charged with a crime.  You could be charged with aggravated assault, which is the act of placing another in reasonable apprehension of immediately receiving a violent injury, in this case by using a deadly weapon.  What if the basis of your defense is that you didn’t actually point the firearm at anyone? That may not make a difference to the judge, or the jury.  As recently as 2016, the Georgia supreme court has noted that “. . . A warning shot, after all, can be an aggravated assault.”  You can find that in the footnotes of a case called Pyatt v. State, 298 Ga. 742 (2016).

And here’s what’s more:  in my experience, prosecutors always follow a charge of aggravated assault when a firearm is involved by adding an additional charge of possession of a firearm during the commission of a crime, a separate firearms offense that carries a mandatory minimum penalty of five years – a five year sentence – tacked onto the end of any sentence for aggravated assault you could receive, which by the way could be a maximum of twenty years in custody.