PANIC IN PUBLIC: When Someone Sees Your Firearm 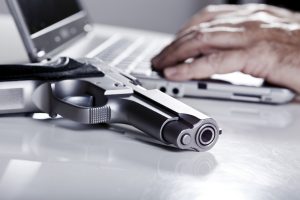 Someone sees your concealed weapon in public and panics: maybe your shirt lifted when you pulled your wallet from your pocket, revealing your waistband carry? Maybe your purse was held open just a second too long? What are the legal and practical implications?

How to Handle that Moment

Let’s first begin by reviewing Georgia’s concealed carry law. A Weapons Carry License holder is authorized to carry a weapon in every location in Georgia not specifically prohibited by statute; [O.C.G.A.. § 16-11-127]. This includes public locations: banks, restaurants, even the grocery store.

The owner or person in legal control of any of these public locations can exclude or eject an individual in possession of a firearm, but you must be given notice first. That isn’t our issue, however. Our issue is another individual in public who is alarmed simply because you’re carrying a firearm.

What if this concerned citizen informs management?

That’s fine. With your Weapons Carry License, you are lawful to carry in a public space, either openly or concealed. If the owner or manager of the public location asks you to leave, you must leave. Simple and to the point: if the individual in control of the premises says go, you go. No harm, no foul. You take your firearm and you go. That’s the law.

What if our concerned citizen calls the police?

Remember, you’ve done nothing wrong. You are a Weapons Carry License holder, and therefore may carry in public, either openly or concealed. Go on about your business. If the officer arrives and begins to question you, keep these two things in mind:

How should you react if confronted directly by this worried shopper, this concerned citizen?

I believe this could be the best response: if you don’t have to talk to police, you surely don’t have to talk to a private citizen. If you are worried your responses may be taken out of context by someone who is already on edge about your weapon (and that’s not an unreasonable concern), don’t take the bait. Complete your bank transaction, your shopping trip, or your cheeseburger, and move along.

Don’t respond, don’t engage. Remember, as lawful Weapons Carry License holders, we often must make more informed and civilized decisions than others. Don’t give that frightened member of the public the reaction he or she may want – or that police may look for – to justify intervening.

If your frightened onlooker demands a response, or a response is simply unavoidable, the most simple and reasonable is best: “Have a nice day.” As with so many things, less is more.

Of course it’s your Second Amendment right to possess a firearm, and of course Georgia law allows you to do so. But you won’t win a debate in the line at the grocery store, because it’s hard to have a civil discussion with someone who’s panicked.

Your goal is to protect yourself and to leave the establishment with your life and liberty intact. Take the high road, knowing you’re in the right. You may call the police if you feel threatened, and as always, you may lawfully protect yourself if the situation demands.

In our world, people are easily offended and just as easily frightened. Be mindful of this when you carry, and realize your best weapon could be a cool head!